This guy (from the website The Hustle) is going to document his 30 days on Soylent.
http://thehustle.co/how-this-guy-is-going-30-days-without-food

Edit: Week 1 summary is now up.

Edit 4: Finale/Summary of experiment is now up

Just once, I would like to see a more legitimate Soylent challenge, one that both reflects how most folks consume Soylent but that also “challenges” the individual to see if they could depend on Soylent for his or her sustenance. This kind of challenge would have the person drink Soylent for at least 50% of the calories for two months, with some days going up to 100% and most days hovering around 75%. Allowing snacks, at least one meal a day of “real” food and otherwise showing how Soylent can be a major component of a diet–without being required to actually BE the diet–would provide a far more accurate portrayal of how Soylent can fit in one’s life. These 30-day (or one week or whatever) challenges are gimmicks and unhelpful.

You’re basically asking for a case study, but the whole point of challenges is to take things to extremes to see what happens

I think these sorts of blogs also turn out to be excellent word of mouth for Soylent, it’s how I first heard about it. Then I went and found a more rigorous one done by a med student.

I like people to prove that eating nothing but Soylent works well for their health. Then I have confidence that by switching part of my diet to Soylent, I am making a very healthy choice.

This type of challenge usually produces more of personal observations like getting used to taste, “energy” reports, missing regular food, hunger descriptions or struggles with powder mixing.
There is nothing extreme in 30 day diet, which was not only designed to be complete, but also well tested by people staying exclusive on it for a year or so.
The lamest part, health-wise, is assuming that a month can bring some kind of risk and implying that it requires bravery. Bravery and iron will of denying yourself tasty treats, as if you were a child trying to stay off candy.

I suppose I should clarify my criticism given these thoughtful replies. My primary reason for finding fault with the 100% Soylent approach is that it is wildly unrepresentative of how most consumers will actually consume Soylent. Think of ANY other food and ask yourself what it would be like to live exclusively off of it for any length of time. Let’s leave aside the health dimension and assume that your product of choice–cheeseburgers would be mine–is in fact healthy enough to sustain that one-product diet. How long do you think it would take you to get sick of that product? And how might your perceptions of it be shaped by the fact that it is the absolute only thing you are eating?

Second, there are known digestive issues with diving into Soylent 100%; our little booklets that ship with the box recommend a gradual uptick to the portion of the diet in order to avoid problems. (Personally, I found their gradual uptick to be way too fast and had to be much more gradual.) Now, if you need to ease into Soylent to avoid digestive problems, then it logically follows that one who does NOT ease in is that much more likely to have those digestive problems, otherwise why issue the warning? This in fact has been a complaint of many of these Soylent experimenters.

Third, because the entire engagement of Soylent is artificial and doesn’t reflect how a typical consumer will actually consume it, the impressions conveyed by the 100%ers is distorted and feeds into the false belief that is strangely widespread that somehow Soylent requires you to commit to it exclusively. Long ago there were threads on this point, and to this day people still ask me how it is that I can live on it, as if I am somehow obligated to avoid other foods because Soylent is part of my diet. Now for me, Soylent is a really high part of my diet, but that’s not really known by the folks who ask me this question; it is assumed by them, based on their reading these blogs. I know that most Soylent consumers drink it a lot less than I do, and certainly A LOT less than 100%.

In summary, I can think of no other product in which the standard method for communicating what it is all about is so fundamentally at variance with how the product is actually used by its existing consumers. It’s like reading a review of sports car that stresses its towing capacity or trunk space–features that exist in every car but that aren’t why you buy them if you are in the market for sports car. I don’t buy my other food based on expectations of what it would be like to live on it 100%. I have some other concerns with these blogs, but that captures the essence of my criticism.

What about those of us who have been using Soylent as our primary staple diet for about a year now? I go days without consuming anything but Soylent. I am physically active now, more than I was a year ago when I started. I am also diabetic and have seen my A1c values go down and hold steady since last August as well as having one of my medications reduced by half. I don’t know why the assumption is made by people that going on 100% or near enough is not a viable or realistic usage for Soylent. That is exactly what sets it apart from all the other meal replacement shakes!

I also use it pretty overwhelmingly in my diet. But we are not the norm. More importantly, we are not required to be the norm, which is implicitly communicated by the uniform presentation of Soylent as a product that is consumed exclusively of other foods.

Going 100% (for days at a time) could be realistic. It may not be about commitment and trying to stay exclusive. In my case, having 2000 cal in a pitcher is immensely useful metric for food intake - it’s almost exactly what I need to maintain weight. If I throw in traditional meal during the day, I will be overeating. I have 3 options:

For most days, I go with last option, following logic of least waste of food and time.

I suppose I should offer a final clarification. I do not argue against going 100% Soylent in any way: I have done it myself for long stretches and usually hover around 75%. What I object to is presenting it as the norm to people who have no real understanding that they don’t have to do it. Given the knee-jerk objections many have to the very idea of Soylent, this distorting image (since most people do NOT use it 100% feeds pre-existing biases and is simply inaccurate insofar as it leads people to the conclusion that you basically need to commit to Soylent as your exclusive food source, and gee, look at all these (often bad) things that follow from that choice.

I agree. Most of the articles I’ve read end up focusing on how badly they want some French fries, or how they are sad to be “unable” to go out to eat with friends or have a piece of cake at a birthday party. They read more like your standard “diets suck” essays. I’d like to read other experiences where people eat “regular” food without considering it cheating.

Week 1 summary is now up. I edited the OP to include the link as well.

One of my buds is going 30 days on Soylent.

I know that this has been done before, but the difference is that he has run the mile in 4:10 and is doing the month while running 70 miles a week.

We’ve all done this before, amirite? 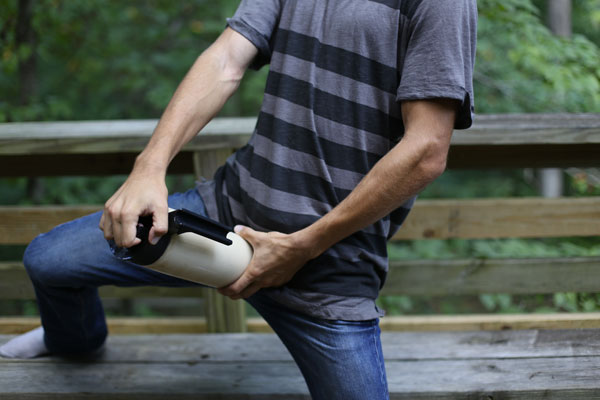 He makes some insightful observations:

Do I value efficiency over pleasure? I’ve grappled with the idea that maybe the added productivity hours aren’t worth it in this life. I didn’t realize it until I broke my streak of a couple decades of eating, but perhaps food is one of the best simple pleasures of life. Yeah, it’s a no-brainer, but this challenge makes me appreciate the little things.

I think the next few weeks will be telling as I start to settle into a routine. Maybe it’s possible to actually forget about the sensation and satisfaction of food. Maybe I will be able to adapt to the idea that food doesn’t even exist. Maybe it can be like my Instagram account: I thought it was valuable and necessary for so long, but once I deleted it, I didn’t even miss it.

Soylent has made me appreciate good food even more, and I certainly don’t miss the awful meals I replaced with it.

Cool… Yeah there’s already another thread on this… Interesting to see his experience though.

Wow, if he had ran that time at any point up until October 4, 1931 he would have held the world record for mile time. Impressive.

Funny because him and hsi dog hold the world record for fastest dog/human combo. They ran like 4:16 a while back.

According to his post, he ingested 3750 calories one day, and he says he is drinking only Soylent and water, so that would mean he had almost two full pitchers worth one day.

a discussion has already been posted about this.

that would mean he had almost two full pitchers worth one day.

That’s honestly impressive. Ive been wanting to start working out more and putting on some weight, so stories of someone thats incredibly active and consuming large amounts of Soylent is kind of inspiring.