Changing the taste of 1.6 without affecting nutrition too much

When I first switched from 1.5 to 1.6, I liked it. It nearly tasted like nothing. Weird but it did the job. But then, I don’t know why, I was sick. I threw up for half a day a couple of hours after my Soylent meal that day. I don’t think Soylent was the cause, but still.

I think I was affected psychologically, because now, whenever I drink Soylent, I slightly feel like puking. I really like the convenience of it, so I don’t want to give it up for such a trivial reason, so I’d like to try to change its taste to see if it helps me get over my feel-like-puking problem.

I initially thought of putting some Quik chocolate milk powder into it, but that would obviously mess with the nutrient balance of Soylent, with all the sugar.

So I thought I’d ask for opinions on what I could do to give my Soylent some taste without ruining the whole point of a balanced meal.

Would cinnamon taste OK even without added sugar?

I alternate between adding cinnamon and chocolate powder in my Soylent, no extra sweetener needed. Just a single spoonful is enough. Tastes great, IMO. Been doing it for many months.

What about the chocolate powder? Doesn’t it contain sugar?

[quote=“Tsukimi, post:3, topic:26051, full:true”]Would cinnamon taste OK even without added sugar?[/quote]Works for me. I find 1.6 has enough sweetness as is.

No, it’s for baking; there’s no sugar. 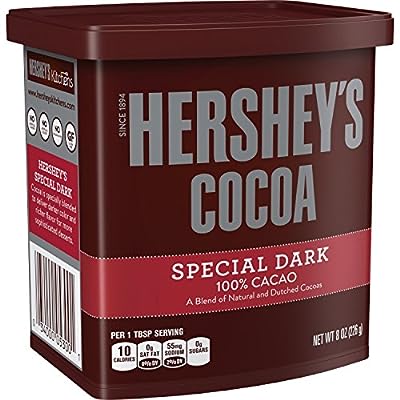 Founded over 120 years ago by the first American to develop a formula for manufacturing milk chocolate, the Hershey's brand creates delicious candies that are known and enjoyed by millions around the ...

Assuming this is a short term hack, then just use Quik chocolate milk powder or whatever makes your brain forget about your previous experience. As time goes by add less and less and eventually just don’t add anything.

I did the originally with 1.5 and it all worked out fine. Your body (unless you have issues like diabetes) will handle it just like it did with your diet before Soylent. My goal has always been to get close, not exact.

Oh, you meant cocoa. Hmm, I could try that.

What if I just can’t stand normal Soylent anymore at all? Oh, I wonder if buying Splenda and putting that in along with cocoa/something else would work.

There are a bunch of threads specifically for flavoring. If you want to continue with Soylent then I would read those and try what you think will help. There are lot’s of different opinions. For you, yours is the only one that matters.

[quote=“Tsukimi, post:10, topic:26051”]What if I just can’t stand normal Soylent anymore at all?[/quote]There’s competitors with different flavors. And Soylent will probably have different options in the future as well.