This is an older article, but I don’t think it was ever posted here. 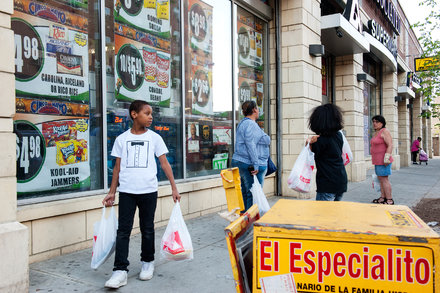 Those living in areas without fresh produce tend not to eat well. But just putting in a supermarket is not a panacea, it turns out.

“When we put supermarkets in poor neighborhoods, people are buying the same food,” said Barry Popkin, a professor of Nutrition at the University of North Carolina, who participated in an Institute of Medicine review of food desert research in 2009. “They just get it cheaper.”

It’s possible that poverty itself explains a lot of the shopping variation. In general, fresher, healthier food is more expensive to buy than less healthy processed food. It also takes more time and resources to cook, and keeps for fewer days.

I can think of one food that is relatively inexpensive, healthy, takes little time and few resources to prepare, and keeps for at least a year.

Unfortunately, it seems education plays a big part as well:

If people can’t afford healthier foods, then it would be reasonable to think that just giving them a better store wouldn’t solve their problems. But Ms. Handbury’s paper found that the education of the shoppers was much more predictive than their incomes. Poorer families bought less healthy food than richer ones. But a bigger gap was found between families with and without a college education. Those results, Ms. Handbury said, suggest that improving people’s diets will require both making food accessible and affordable and also changing people’s perceptions and habits about diet and health.

That seems a much harder problem to solve, even if Soylent is readily available.

While this issue does tie together a wide range of challenges, Soylent’s utter simplicity (especially 2.0) might attract at least some users in food deserts, any of whom would benefit tremendously, especially over the long haul. As a domestic “market” for Rob’s broader vision of Soylent’s socially transformative potential, it would seem obvious that aggressive marketing to America’s inner-cities could get that ball rolling. Perhaps the price might need to drop a little for 2.0 first, and the strategy would require a long-term perspective and a lot of patience, but I think it could be something that starts moving our conversations about food deserts. Nothing ventured…

I was thinking of some kind of a social experiment, but this should be filmed and put on youtube (if anyone ever does it)

Take a bunch of Soylent 2.0 bottles, find some homeless hungry guys, and offer them the bottle, explaining that it’s a fully nutritious healthy meal. Ask them how it tastes like. Tell them how much it costs. See how they react. Would they rather buy this rather than a random sub or sandwich?

Take out a bunch of Soylent 2.0 bottles, bring a bunch of ice, grab a small moving table where you can put this stuff and move it around, go to a busy downtown area, put some sticker, and try selling it.

Take out a bunch of Soylent 2.0 bottles, bring a bunch of ice, grab a small moving table where you can put this stuff and move it around, go to a busy downtown area, put some sticker, and try selling it.

Make sure you get a licence to sell food or you might find yourself getting arrested like many other groups that have tried to sell or even give food away for free to poor and homeless.

This in turn raises another, possibly parallel option for RL: partner with food banks, soup kitchens, etc. Cynically, it amounts to marketing dollars in places (food deserts) where Soylent can start appearing on the shelves of corner markets. Less cynically, it will directly help achieve one of Rob’s goals. Charity is tax-deductible, too. Part of any such strategy would have to include developing a retail identity.