Manganese amount is mislabeled and over the USDA maximum limit?

The official Soylent labelling specifies 2 mg of Manganese per pouch. However, at the bottom of this page on the Soylent website ( https://faq.soylent.com/hc/en-us/articles/204466079-1-4-Formula- ) there is a spreadsheet that can be downloaded which shows the more detailed list of ingredients.

According to that spreadsheet, the total amount of Manganese is 14.9 mg per pouch (mostly because there’s a lot of it in the rice protein powder). The USDA maximum daily intake is 11 mg. The (approximately) 2 mg per pouch officially advertised by Soylent seems to only refer to the amount specifically added as Manganese Sulfate (completely unnecessary according to that spreadsheet).

Maybe the food labeling regulations allow Soylent to advertise in this way, but this is misleading, especially given the total amount of Manganese is above the maximum safe limit set by USDA.

Official clarifications badly needed on this!

Good catch! There seem to be many glaring discrepancies between the spreadsheet, the landing page, and the Nutrition Facts label. An interesting one is where the spreadsheet 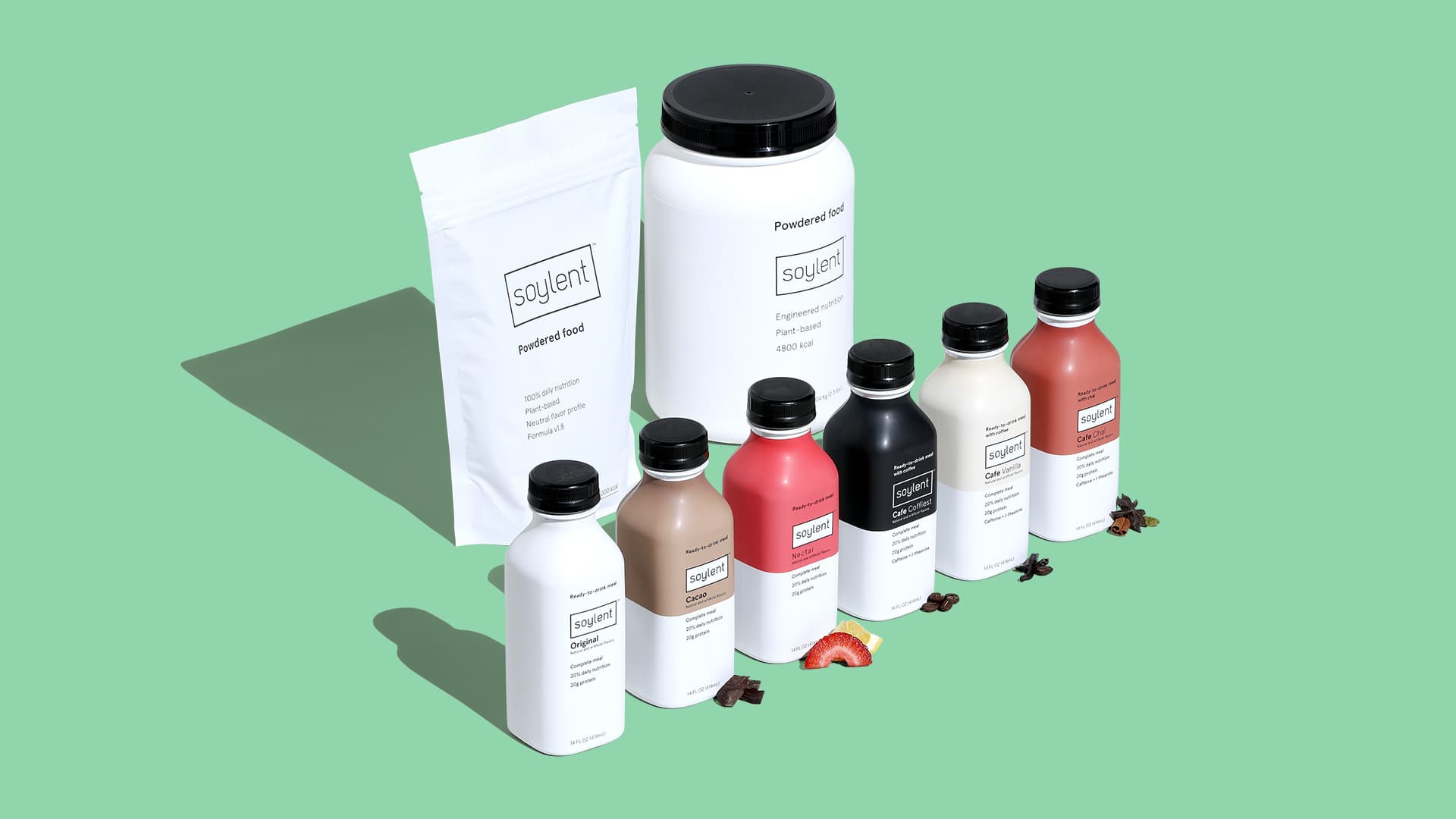 Soylent.com — Let us take a few things off your plate.

Protein, carbohydrates, lipids, and micronutrients: each Soylent product contains a complete blend of everything the body needs to thrive. It turns a full meal into a one-step process. It makes things a lot less complicated. And when you’re busy, it...

There may be an issue of bioavailability here; manganese is not easily absorbed, and uptake is limited by the presence of ample other minerals, like iron, calcium, magnesium. But this amount certainly seems too high, on the face of it. I suppose it’s not impossible that the mineral blend being used contains manganese unnecessarily, but I’d rather that not be the case.

Thanks for bringing it up.

I don’t think it is deceptive, it is just a matter of context. The list on the link you provided isn’t a list of nutrients, it is a list of constituents with their amounts and key nutrients.

I don’t think it is deceptive, it is just a matter of context. The list on the link you provided isn’t a list of nutrients, it is a list of constituents with their amounts and key nutrients.

Yes, but the Nutrition Facts label clearly indicates a bag total of 100% of the DV for manganese, which would be 2.0 grams.

The discrepancies from the spreadsheet and the label are misleading. However, looking into manganese consumption, I found this.

“Manganese toxicity resulting from foods alone has not been reported in humans, even though certain vegetarian diets could provide up to 20 mg/day of manganese (4, 32).”

There’s 2.2mg of manganese from the vitamins and lots from the brown rice protein, but according to the Linus Pauling Institute, it seems that vegetarian diets high in manganese are safe. I would like to see Soylent switch to soy protein, it’s a more complete protein with less manganese.

It’s not mislabeled. Whenever we make a change we do heavy amounts of research from the best available sources.

I would trust the spreadsheet for the real values since it breaks it down by ingredient and seems more precise in the data. Maybe it has to do with bioavailability of manganese from vegetable sources since there is no known risk of toxicity from vegetable manganese (my post above)? The UL refers to supplemental manganese, which in 1.4 is only 2.2mg. Clarification on this would be great.

Source: I bodybuild and study nutritional science, but check out Linus Pauling Institute for info on vitamins and minerals.

I think that a) there probably isn’t a danger of toxicity even with 14.9 mg and b) the food labelling regulations may allow Soylent to only indicate the supplemented amount in the case of such trace minerals. But nevertheless it’s misleading and, given the Soylent customers aren’t scientific experts on the safety of Manganese, they’re entitled to worry if they discover they’re consuming something exceeding the USDA maximum limit.

Soylent could just openly say “We’re labeling it this way because the regulations allow us and we just want people to think we provide a nice-to-the-eye 100% of the Manganese recommended level. We know we’re over the USDA limit, but our experts/research say that this is safe, so don’t worry.”

I’ve emailed them once in the past regarding some other (non-worrying) discrepancies on their website and the reply I got was also quite disappointing; they just said they’ll point this out to someone so that they’ll be more careful in the future, without correcting it on their website. (Look at potassium here https://www.soylent.com/ (3.8 g) and here http://files.soylent.com/pdf/soylent-nutrition-facts.pdf (3.5 g), and there are other contradictions as well.)

Given we got nowhere with Conor and my bad email experience, it would be great if someone reading this could point out this topic to someone else in the Soylent company. Thanks.

Apologies for the lack of a detailed response. I had to speak to the development team.

Plant origin foods such as tea, whole grain cereals, some dark green leafy vegetables, and nuts contain high amounts of manganese. How- ever, these products often concurrently contain high amounts of tannins, oxalates, phytates and fiber. These dietary constituents have been found to inhibit the absorption of other minerals; hence, might have a negative effect on manganese absorption.

Absorption of such minerals as iron, copper, phosphorus and calcium i s superior from animals products than from plant-originfoods. As reported by Kies et al. (in this book), manganese apparently is better absorbed by humans from meals containing meat and fish than from those contain- ingplant-proteinreplacementproducts.

Evaluations of standard diets from the United States, England, and Holland reveal average daily intakes of 2.3-8.8 mg Mn/day. Depending on individual diets, however, a normal intake may be well over 10 mg Mn/day, especially from a vegetarian diet. While the actual intake is higher, the bioavailability of manganese from a vegetarian diet is lower, thereby decreasing the actual absorbed dose. This is discussed in more detail in the Additional Studies / Comments Section.

EPA's Integrated Risk Information System (IRIS) is a human health assessment program that evaluates information on health effects that may result from exposure to environmental contaminants.

Another issue of great importance to consider in the risk assessment for manganese concerns the bioavailability of different forms of manganese consumed under different exposure conditions. Various dietary factors as well as the form of manganese can have a significant bearing on the dose absorbed from the GI tract. Many constituents of a vegetarian diet (e.g., tannins, oxalates, phytates, fiber) have been found to inhibit manganese absorption presumably by forming insoluble complexes in the gut. In addition, high dietary levels of calcium or phosphorus have been reported to decrease manganese absorption. Individuals who are deficient in iron demonstrate an increase in manganese absorption. It is also recognized that manganese uptake and elimination are under homeostatic control, generally allowing for a wide range of dietary intakes considered to be safe.

Manganese found in vegetable products will have a lower bioavailability than that found in supplemental form. Due to the high quantity of vegetable based ingredients in Soylent, the absorption of manganese from these sources is expected to be low in comparison to the manganese sulfate in the vitamin/mineral premix. To ensure the adequate quantities of bioavailable forms of manganese, we listed only the supplemental form on the label, though small amounts of the manganese found in brown rice protein and oat flour can be absorbed.

With regards to the website, we are in a stage were we are updating it on a daily basis. One potential pitfall is that we miss changing some information.

we listed only the supplemental form on the label

Can you get us a complete list of other micros you are leaving off the label?

Thank you for the clarifications.

It may be a good idea to include this information on the manganese FAQ page. I can see these questions coming up a lot.

If its because of the rice protein why not use a mixture of rice and pea protein? Sure some people are allergic to peanuts, but wont it be labelled as having pea product in it?

Or whey (sure it will no longer be vegan) but this is better than 14 mg of manganese isnt it?

And it will still be ‘‘Vegetarian’’!

Or if its because of the oats…then why not ‘explore’ using a blend of oats and quinoa flour? (that is if quinoa does not cause any problems if consumed daily ofcourse).

Also @conor, oxalates and phytates may inhibit manganese. But to how much extent? And yes manganese from vegetable sources is less bio-available than from supplements etc. But vegetables are not the only sources we get manganese from. We get it from tea as you mentioned, also drinking water.

The point i am trying to make is since people already get quite a lot of manganese from tea/presumably coffee too and drinking water (which is very bio-available), wont it make sense to lower the amount of manganese people get from soylent atleast?

It was really saddening to read that it has this much amount of manganese. I was in love with this product/idea too as a whole, but reading about the amount of choline it has…the other day and now about manganese felt very very disappointing.

Please lower the amounts of these two and any other ‘‘unnecessary’’ ingredients. This could be a marvellous product but these kind of things are ruining it.

Can you get us a complete list of other micros you are leaving off the label?

You can just look at the spreadsheet the opening post referred to.

I too would really like to see some more info on the extent to which the Manganese from vegetable sources is less bio-available, because this extent would have to be very great to justify adding supplemental Manganese on top of an amount that is already six times the daily recommended dose and a bit over the maximum limit set by the USDA.

I’m fairly confident that it’s safe, but still don’t feel comfortable with this much Manganese, since Manganese toxicity affects the brain; and that sounds spooky…