First impressions are in. 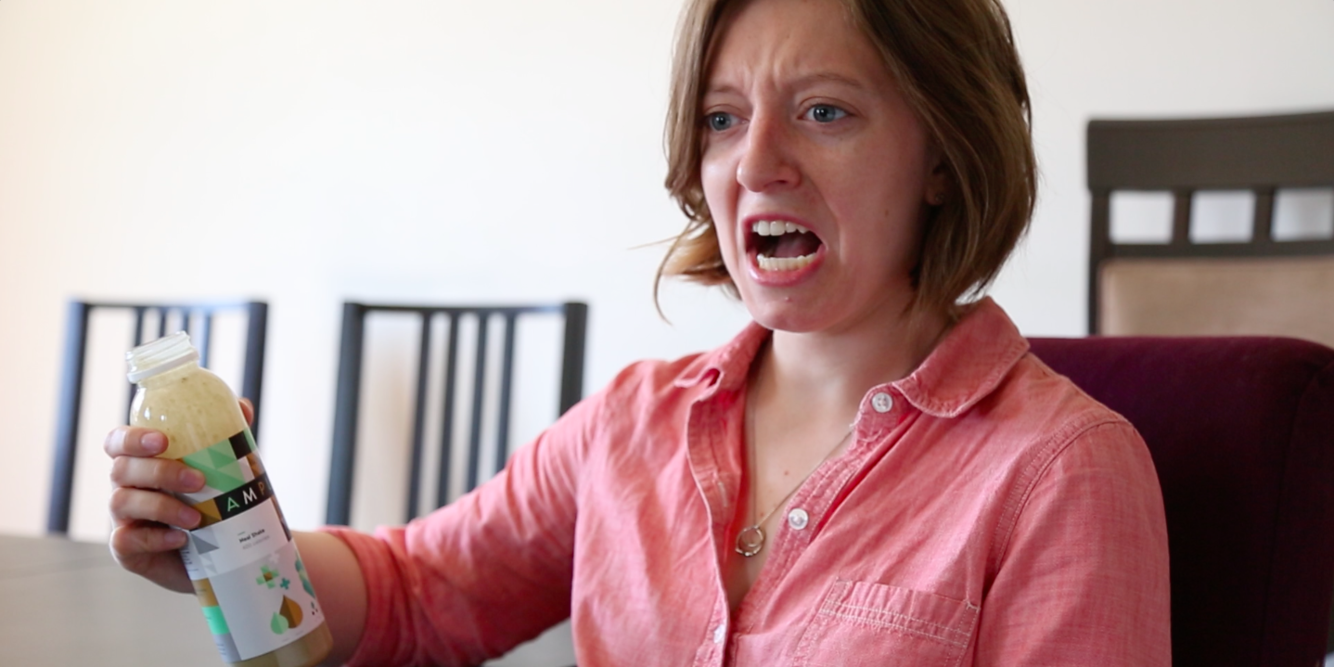 We tried the meal replacement beverage made of plants that's out to crush...

Ample is a plant-based meal replacement that costs just $4.50. But how does it taste?

Very skeptical of this review:

One of my only complaints about Soylent was its weight. It arrives as a pre-mixed, bottled liquid, which is convenient if you’re hungry at home or at the office. But if you want to pack a Soylent for a hike or bring a six-pack with you to a family wedding, as I was forced to do after my injury, it’s a pain to carry. Plus, it tastes nasty when warm.

Ample, in its powdered, bottled form, is light and still extremely portable.

She doesn’t mention the powdered form of Soylent, that is, ya know, the original Soylent. Despite this, she is a self proclaimed soylent “fangirl.” I throw some in a Nalgene with a blender bottle ball and it shakes it all up quite easily.

Yes, I noticed that. Also, 2.0 doesn’t taste nasty when not chilled, IMHO.

It really annoys me when someone who clearly doesn’t know anything about a science attempts to use it to sell their product to those who don’t know better. I’m not sure if the team actually believe the rubbish they’re spouting about GMOs and “natural” ingredients, or if they’re just using it as a marketing ploy to make a quick dollar, but it really gets to me.

Nowhere on their entire website have they listed a nutritional label that displays more than the macros, vitamins A & C, iron and calcium, so there’s no way of knowing for sure that this steaming pile of rubbish is even nutritionally complete.

With the current information available, there isn’t a hope in hell I’d even take a free sample of this, let alone fork out the ridiculous per meal cost they’re expecting, and I’m frankly amazed so many others have already. Perhaps I’m missing something but all this product seems to offer is big claims hidden behind pseudo-science. Anyone feel free to correct me if they think I’m wrong.

I, too, decided to give this a shot, especially after @axcho gave those guys a pretty big seal of approval.

What mainly sold me is that Ample is made up of paleo ingredients. Prior to Soylent, I was pretty big on the paleo diet – I never felt better, and my digestive system was thanking me everyday. I’ve since fallen off the train, but if Ample delivers, it could be pretty sweet, to be honest. I have absolutely no expectations of consuming Ample as regularly as I do Soylent – it IS pretty pricey – but I want to give it a shot nonetheless.

“We only have 3 days left in the campaign and have SOLD OUT our lifetime supplies completely (that’s 30 lifers!). If you’re interested, please try sending us an email at cyoung@amplemeal.com and tell us why you’d like a lifetime supply. Open on a case-by-case basis - thank you guys all SO MUCH.”

So now they are opening up the lifetime supply offer a third time.

Yes, I just took a peek at it last night. From what little I seen of it the cost was pretty high and only seen the video of the owner saying “it tastes good”. I also prefer to see actual reviews before spending my money…

I had a chance to try Ample this weekend - here’s my actual review.

I bought a lifetime supply right afterward (spoilers!). That’s probably the seal of approval @ravenvii is talking about.

$6000 for a “lifetime” supply of two Ample meals a day for how long? Will the company still be around in a year or two?.. This might be a good deal if you both like Ample (the product’s taste, etc.) and the company delivers for a minimum of 2.3-5.3 years.

I like (conceptually) the product. It is the math that doesn’t make sense to me. @axcho, you use mostly your own product, right? But now you are going to supplement half your diet with Ample? You are going to consume more Ample than your own Super Body Fuel?

I like (conceptually) the product. It is the math that doesn’t make sense to me. @axcho, you use mostly your own product, right? But now you are going to supplement half your diet with Ample? You are going to consume more Ample than your own Super Body Fuel?

I currently use Super Body Fuel leftovers, experiments, returns and other unsellable stuff for over half of my daily caloric intake. I’m too cheap to use up product I could sell to customers, especially when there’s a backlog.

With a lifetime supply of Ample, I may well end up deriving more calories from Ample than SBF, though that remains to be seen (I will probably share a lot of it with my girlfriend). The biggest benefit for me will be the convenience.

But Ample is more expensive, right?

(Sorry if this is bordering on OCD.)

The biggest benefit for me will be the convenience.

Haven’t tried Ample yet, but I do like the idea (as in 100%Food) of the individual bottle ‘Just Add Water’… Probably not a market RL would pursue but I’m glad to see others offering a solution like this.

Edit: ok, ordered a 6 pack of 600kcal due in September… Look forward to trying it.

But Ample is more expensive, right?

Haha, after a couple years of a lifetime supply, it won’t be.

And the most important expense I’m optimizing for with Ample is time (I don’t have to make it or mix it), and the experience of my customers at Super Body Fuel (less competition for my time and my product). 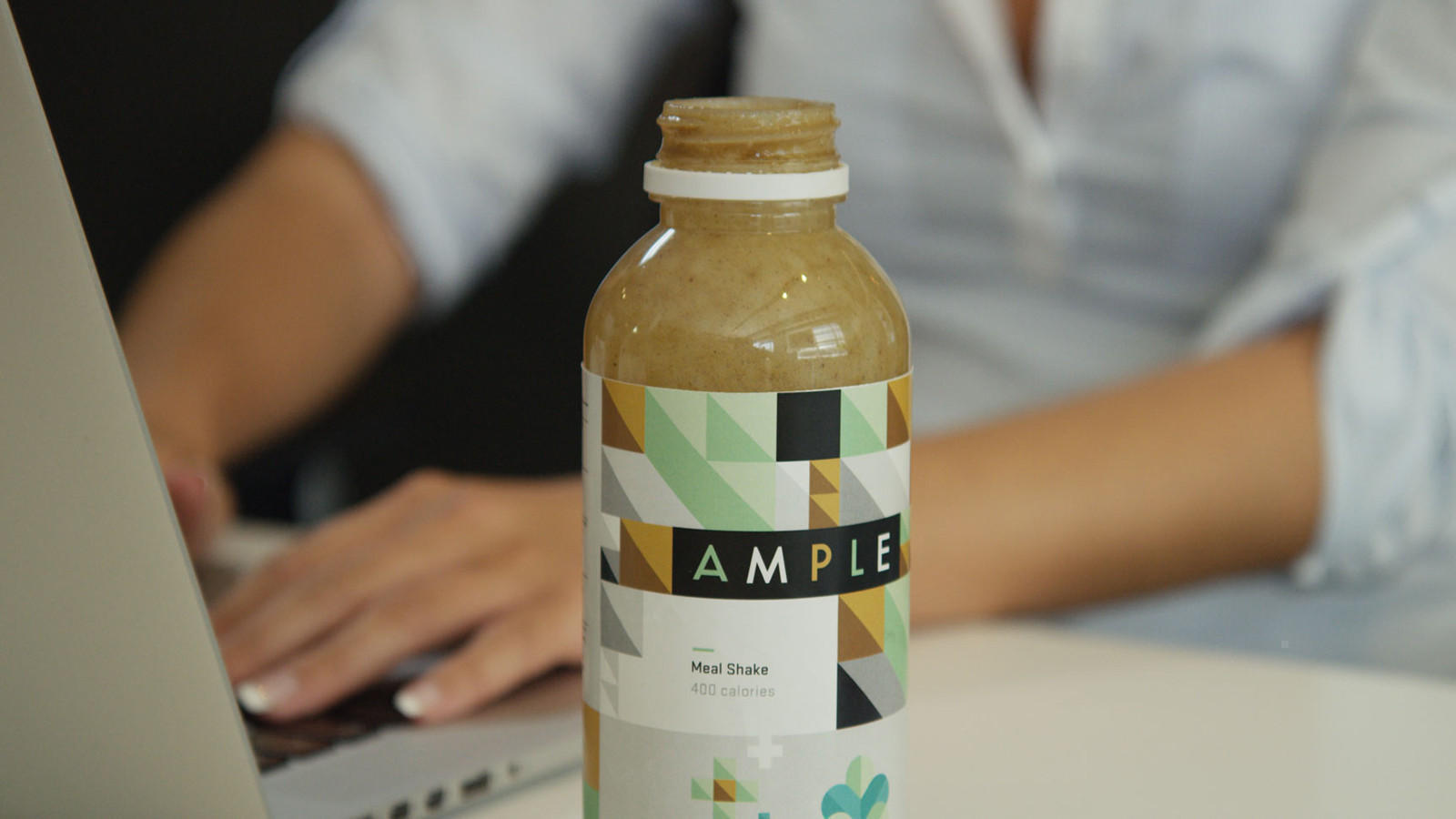 A new meal-in-a-bottle wants to be the new Soylent. With less carbs!

When you think about what  you're going to have for lunch today, your mind might wander to sushi, falafel or even a simple salad. You probably won't be thinking

It doesn’t seem to me that this type of product is likely to appeal to the type of people who want non-GMO, organic, gluten-free, “natural” food.

The LA Times story says the price for a 20-ounce bottle is $6.

Eh, I don’t think it is. All I’m reading is, “The ingredients list reads like the entire supplement aisle at Whole Foods…”

Am I missing something?

Correct. Not available at Whole Foods.

The first link states that it can only be preordered on the indigo page. And the second link states, “Every ingredient on the Ample bottle is recognizable, and can be found in our local Whole Foods.”

Got my Ample order today… Just 6x600kcal. Mainly out of curiosity and because I like the idea of powder in individual bottles (like 100%Food) for some occasions. On their web site it looks like the cost will be about 3x the Soylent 1.7 powder… Ouch! No thanks.

It mixes fairly easily with water (in the 600kcal bottle). They included little plastic molecule models that can be tossed in the bottle to aid mixing (cute)… Like many of these things it gets smoother after sitting in the fridge a while, but honestly it was fine immediately after mixing.

It tastes… uhm… ok. Organic? Kinda like what you’d expect if you went to your hippie granola friend’s house and they put of a bunch of weird grasses into a vitamix, Looks like it too… Not bad… not too bitter or sweet. Nothing like the milky 2.0 taste or somewhat synthetic marshmallow/elmers 1.7 taste (which I actually enjoy now). I could probably get used to it if I were willing to shell out that kind of money (I’m not).

edit: update… on their web site they have values for vitamins A/C… so perhaps an error on the label?
Since the first bottle I’ve had no inclination to open one of the remaining 5. I’m well stocked on 1.7, 2.0 and chocolate Schmilk which all taste better. I also had a bout of constipation after the 600kcal of Ample but it’s unclear if that was the problem… Sometime this week I’ll try another bottle.

(Of the molecule mixers.)

Hey everyone, axcho of Super Body Fuel (and previously, Custom Body Fuel) here. Since I live in SF, I had a chance to meet up with Connor, the creator of an upcoming Paleo-ish meal shake called Ample, which is currently being crowdfunded for a full production run till... Wednesday (tomorrow). He gave me a free sample, so here's my review! :wink: [image] Taste: The taste is hard to describe, because it's not based on familiar grains like oats. The closest thing I could describe it to would b…