Not happy with the delay

I placed my most recent order 9 days ago and it still shows as “Preparing for shipment.” I sent an email asking about the status and the reply stated that because my subscription includes a case of Nectar, they are having trouble “finding a nearest warehouse in which Nectar is still in stock.” Because this is a long holiday weekend, even if they “find” a warehouse with Nectar it probably won’t be until Tuesday at the soonest, in which case I’ll be receiving my order two weeks after placing it.

Because I’m on Soylent 100% a delay of this much time means that I’ll probably run out long before the order arrives. A simple email or pop up notice the moment I placed my order 9 days ago informing me that a delay was anticipated because of the scarcity of Nectar would have prevented this delay, as I simply would have changed my order.

Even If I change my order now to exclude Nectar I’m just starting the process over, but at this point it still may speed up the delivery. What is my best course of action, other than driving to California and hitting up all of the 7-11 stores in Los Angeles?

What is my best course of action, other than driving to California and hitting up all of the 7-11 stores in Los Angeles?

You can drive to Texas and hit up 7-11 stores in Austin: http://food.blog.mystatesman.com/2017/08/28/ready-to-drink-soylent-hits-austin-stores-no-its-not-people/

Ha! Five hours to L.A. or twenty hours to Austin. I’m just glad they are in any stores at all. In the meantime, now waiting for two separate orders to be shipped, I’m rationing the few bottle that I have left.

You can grab a case on Amazon with one day shipping if you’re willing to skip the discount.

Not that it’s likely any consolation to you, but I wonder if this means we’re very close to having the new flavor unveiled.

Similar thing happened to me several months ago. My order got stuck in a bit of limbo and I was going to run out due to the delay, so I just grabbed a case on Amazon with my Prime 2-day shipping and it took care of me. Now I’ve started making sure I have 2 months extra on hand at all times.

I wonder if this means we’re very close to having the new flavor unveiled.

I hope so. I’m looking forward to trying something new, and I hope I like it at least as much as I liked Nectar.

So my delivery showed up 11 (or 12?) days after I placed my order. I had to ration my 2.0 down to 2 bottles per day while waiting, and now I have what I am sure is my last ever case of Nectar.

I’ll try not to let my stock at home get so low again. It was dumb of me to expect to always have any order delivered within 3 days, although up to now the Soylent team has been amazingly efficient. I know these things happen. Oh well, let’s see what the new flavor is!

I received an order of 2.0 recently, with no delay, but I’m in Los Angeles County. I don’t think a delay is normal, unless you are under water or something.

I don’t think a delay is normal, unless you are under water or something.

…or unless you are ordering one of the last cases of Nectar and they are searching all the dark corners and broom closets for any that are left. Which I did.

I think I’ll keep the last bottle of the last case and drink it one year from now on the anniversary of Nectar being put out to pasture.

Hey Soylent, are you going to make a Flavor Graveyard like Ben & Jerry’s did for their retired flavors? You now have two old friends that can be laid to rest there. Rest in peace Nectar and Food Bars. 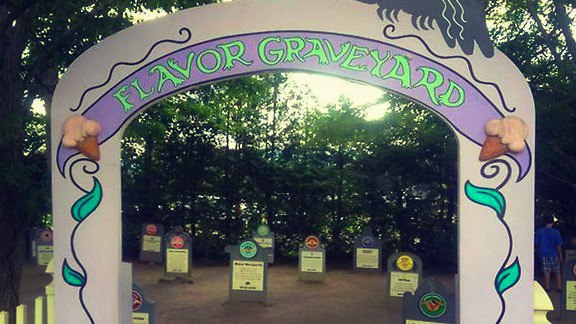 Yeah, I’m not holding my breath on that one. Honestly I never really wanted a Soylent food bar. It kind of defeated the purpose for me. I can totally see why others would want them, though. They just don’t fit in to what I’m doing.

No updates to offer unfortunately.

Some one alrdy made a thread about this, and your issue is alrdy over with… but I just saw this on my google news feed: GoPuff to Ruin College Students With Soylent On Demand

The eyebrow-raising meal replacement is now available by super fast delivery in Philly and 11 other cities.