Just reviving this topic a bit, I know its been talked about before but I am interested in knowing how this subject has changed over time and if anyone has some new insights. I am new to DIY soylent and I have begun building my first recipe. I spent a fair bit of time looking at other recipes and trying to understand the methodology and choices that other have made so far. One issue that has cropped up was the adverse affects of Phytic acid to mineral bio-availability and digestion of other elements such as protein.

From what I see when reading through recipes, the majority of people seem to completely ignore the issue of Phytic Acid, or at best they overload on minerals in a hope to cover up any chelating that may occur. In Australia, where I am from, the majority of the most popular recipes all contain Oats in one form or another, it seems to be the go to cheap carbohydrate source in this part of the world.

I found a really interesting article that went into great detail about Phytates and Phytase, how they all work, where it is found, and how it affects our nutrition.
http://www.westonaprice.org/health-topics/living-with-phytic-acid/

Previous threads have dealt with this issue before but there appears to be a lot of misinformation in the comments and responses in these threads. Especially to do with alternatives to oats.

Some alternatives I have heard mentioned include Rice Flour and Almond Flour, but Brown Rice is actually higher in Phytic Acid and Almond Flour is not much better than Oats. Most people say that soaking these grains is enough but that is not the case, it wont eliminate much of the acid at all, see this: 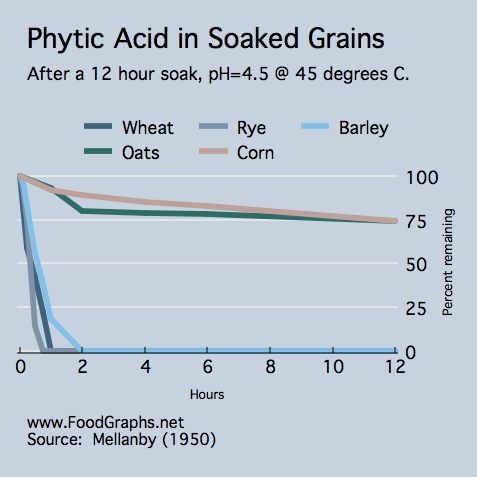 One popular alternative is Masa Harina, many people assume that the lime water processing or nixtamalization used in the creation of Masa Harina is enough to reduce phytic acid, but in actual fact, only around 20% of the acid content is reduced (http://www.phyticacid.org/corn-phytates/). When you compare the base phytic acid of oats to corn, Masa Harina may in fact be a worse source of phytic acid than oats.

Malted Barley has been mentioned before as well and I think that this is probably our best bet as the malting process is shown to eliminate approximately 57% of phytic acid in barley, leaving only around half a percent of phytic acid present.

I would like to hear some feedback from others who has tried malted barley, what sort of nutritional information is available on it, and what is the best form for milling to a flour (crystal malt has been mentioned before but what is it).

Also if I have overlooked any possible carbohydrate sources that would be low in phytic acid with good taste and nutritional profiles, I am very open to suggestions.

I would not ingest relatively large quantities of oats on a regular basis. In addition to numerous antinutritional factors in raw oats, such as phytic acid, saponins, oxalates, and polyphenols, there is the possible presence of E. coli O157:H7 and Salmonella, causative agents of foodborne disease. As you indicated above, soaking is not an effective means of eliminating antinutritional factors in oats. Proper heating will kill the pathogens and reduce the antinutritional factors, but not eliminate them. Soy flour is heat treated to kill pathogenic organisms during the course of production but generally oat flour is not.

Starches are a carbohydrate (CHO) alternative to oats. Corn starch is cheap. Unmodified potato starch has the added benefit of having a large percentage of resistant starch (RS2). Resistant starch acts similarly to both viscous and nonviscous fiber. A disadvantage of starches is their high glycemic index (GI).

Another viable CHO alternative is isomaltulose. With a GI of 32, isomaltulose is relatively low GI, easily assimilated, and has a neutral flavor.

How much phytic acid is in various parts of the seeds of those plants? How much is in their flour?

That’s my solution. I love the oats. They’re smooth and taste good. If I need a little extra micros, then so be it.

I’ve read sprouting helps reduce the phytic acid, but I don’t know how much. This sprouted oat flour was great when I tried it.

PA is relatively high in seeds and bran.

yes I know. how high?

I don’t know. A chemotaxonomic database of antinutrients would be very useful but I don’t know of one.

If the information is accurate this site seems relevant to the discussion.

From the site linked above.

Some of the old DIYers (who are no longer around here… maybe the phytic acid did them in…) had been microwaving their oats rather than soaking, I don’t know if anyone here still does, or how effective it is though. I don’t use them, so haven’t looked to deep on the subject.

Microwaving for about 3 minutes can remove all saponins and roughly half of PA and other antinutrients.

@nutrisludge That sounds interesting (if a bit wasteful) … does this apply to oat flour and rolled oats? Is this for the dry oats, or after mixing with water? And what quantity of oats does this apply to? Thanks!

It applies to both oat flour and rolled oats. It is not necessary to mix the oats with water. The quantity of oats doesn’t matter as long as long as the oats are raised to a minimum temperature of 160F for at least two minutes.

Okay well we all seem to agree that PA is a serious issue that needs thorough consideration.

Now we can conclude that the reduction of PA requires 4 things:
Moisture
Warmth
Acid pH
Time

That being said, you can further increase the speed of this process by adding a small amount of a high phytase grain such as Rye flour to the soaking medium.

The problem with grains that are high in PA is that it dramatically slows the process of preparing a soylent batch. Another issue is that once the soaking process is complete, how do you return this back to a powder form for longer term storage.

I can see that it could be feasible from a time perspective, to process 5-10kg of oat flour at a time, but would the end result be easily stored as no one is going to be making such a large amount of soylent right away.

@FuRyZ The four requirements that you list certainly appear to be mitigators for the effects of PA, but my impression was that it is only necessary to apply one of these, and not a combination. That is, it would be sufficient to either soak the grains, or to apply heat, or to add ascorbic acid, and that it is not necessary to apply all of these measures. Are you saying that we’d have to do all of these things? I really don’t want to have to soak the oat flour that I use, but putting it into the microwave for a few minutes would probably be acceptable. Adding a couple of grams of ascorbic acid may be even easier, provided it doesn’t cause nausea or digestive issues.

Okay well we all seem to agree that PA is a serious issue that needs thorough consideration.

Actually, I don’t agree. I’ve found that phytic acid concerns stem largely from attempts by propagandists in the paleo camp to highlight and exaggerate the “dangers” of plant-based, especially grain-based, foods.

The effects of phytic acid are chiefly of concern in third-world nations where adequate nutrition is difficult to achieve, and even there, are mostly of concern for young children deriving their nutrition from inadequate amounts of unfortified grains mixed with little else.

Summarizing it in an admittedly snarky way, the original work was focused on semi-starving children subsisting primarily on rice or another staple grain, but the details have recently been popularized by overweight westerners interested in eating a mostly-meat diet in order to slim down.

That’s not to say that phytic acid is a complete non-concern and should be completely ignored; I think it’s a perfectly appropriate component for dietary tweakers to discuss and tweak… but, in my opinion, calling it a “serious issue” wildly overstates the case.

For my part, being an adult male in a 1st-world nation, I’m sticking with my oat-flour-heavy DIY formulae, and will not be treating it to reduce phytic acid. The primary thing it antagonizes is iron absorption, and we generally need to keep that low - our non-soylent diets contain plenty of iron, and our bodies store it very efficiently, even ramping up the absorption if stored levels begin to drop.

The science behind our iron storage/utilization is currently undergoing some interesting and rapid development, and new techniques of assessing iron stores may shed more light on iron needs & dietary impacts, when we can more accurately assess the impacts of various dietary changes. http://www.ncbi.nlm.nih.gov/pmc/articles/PMC4345694/

If I were a menstruating female, I’d want more iron in my DIY - which I would probably address by using a multivitamin with iron, instead of the iron-free one I currently use.

The impression I got was that you needed all 4 to activate the phytase in the grain to eliminate PA. Without a supply of phytase (rye flour additive) and a warm acidic solution, you won’t be able to reduce PA much at all.

Here is what was said: " Oats contain very little phytase, especially after commercial heat treatment, and require a very long preparation period to completely reduce phytic acid levels. Soaking oats at 77 degrees F for 16 hours resulted in no reduction of phytic acid, nor did germination for up to three days at this temperature.63 However, malting (sprouting) oats for five days at 52 degrees F and then soaking for 17 hours at 120 degrees F removes 98 percent of phytates. Adding malted rye further enhances oat phytate reduction.64 Without initial germination, even a five-day soaking at a warm temperature in acidic liquid may result in an insignificant reduction in phytate due to the low phytase content of oats. On the plus side, the process of rolling oats removes a at least part of the bran, where a large portion of the phytic acid resides."

Another section mentioned that grains that are roasted showed a 40% reduction of PA. So a thorough nuking could indeed help. Also as mentioned above, a large portion of phytic acid is in the bran of the oats so rolling oats will help as well.

I haven’t been able to find a definitive study as to what exact percentage of PA is reduced in the rolling process.

I agree that much of the initial argument was used by the Paleo camp, I am not Paleo in any way but the science behind this has some merit.

As for it being a serious issue, I don’t think it’s a serious problem for someone who eats oat heavy soylent for one meal a day or just occasionally, but ONLY consuming this type of soylent long term without addressing PA’s affects to the micronutrient profile could eventually lead to mineral deficiency in my opinion.