Processed meat causes cancer according to WHO 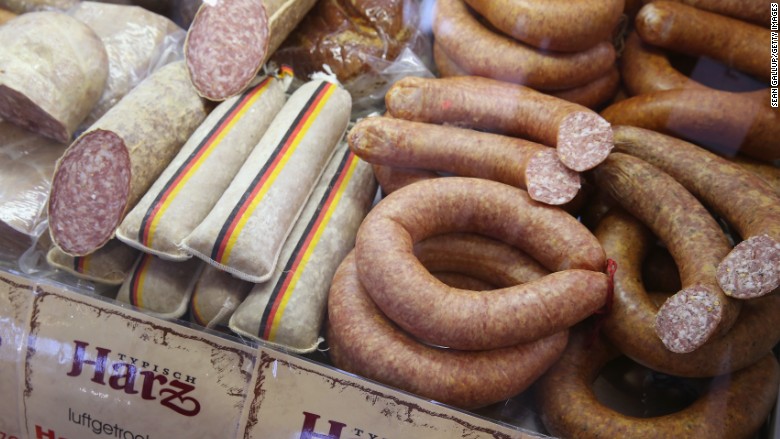 The World Health Organization said Monday that processed meat such as sausages and ham can cause cancer, while unprocessed red meat may also be carcinogenic. Glee, Panic and Yawns: U.S. Reacts to Report on Meat and Cancer

Lobbyists on both sides were ready for a new report on meat and cancer. Bacon, burgers and sausages 'are as big a cancer threat as cigarettes'

A new World Health Organisation report has classified processed meat as carcinogenic alongside arsenic and asbestos. Officials said less than one sausage a day increases the risk by almost a fifth.

Here’s a nice debunking of the idea of equivalency between red meat and smoking as cancer causes: https://fullfact.org/factcheck/health/processed_meat_cancer_smoking-49150

(I’m not sure whether the idea of that equivalency came from the WHO or not.)

As far as I can tell… Everything causes cancer.

Here’s a nice debunking of the idea of equivalency between red meat and smoking as cancer causes: https://fullfact.org/factcheck/health/processed_meat_cancer_smoking-49150

(I’m not sure whether the idea of that equivalency came from the WHO or not.)

I agree, it seems a bit hyperbolic. A graphic from one of the above articles even seems to argue against the headline, making a distinction between “causes cancer” and the “risk” of getting cancer:

It makes me glad that Soylent has allowed me to cut down on my meat consumption.

Also, now when I do consume meat, it is usually fish or chicken and in smaller quantities.

Oh nice, that graphic seems like it sums it up really well.

Hey, journalists: this is your goddamned job.

(I do wish the graphic, or indeed anything anywhere, provided a definition of “processed” in relation to meats.)

(I mean cooking is a process, but I’m pretty sure it’s one that reduces the health risks of eating meat.)

A rehashed scare. Meat and processed meat do not cause cancer.
“High intake of red meat reported in 1992/1993 was associated with higher risk of colon cancer after adjusting for age and energy intake but not after further adjustment for body mass index, cigarette smoking and other [risk factors],” they stated in the study.

The last time this came up it would appear the conclusions were massaged to get a headline worthy result. Is the full text of their current or updated study available anywhere?

Bacon, ham and sausages ‘as big a cancer threat as smoking’, WHO to warn

A rehashed scare. Meat and processed meat do not cause cancer.

(I do wish the graphic, or indeed anything anywhere, provided a definition of “processed” in relation to meats.)

(I mean cooking is a process, but I’m pretty sure it’s one that reduces the health risks of eating meat.)

I actually had the same question. I ran across this from the BBC: “What is processed meat?”

So what is processed meat?

Processed meat has been modified to either extend its shelf life or change the taste and the main methods are smoking, curing, or adding salt or preservatives.

Simply putting beef through a mincer does not mean the resulting mince is “processed” unless it is modified further.

Red meat is a darker colour than white meat and includes beef, lamb and pork because of higher levels of proteins that bind to oxygen, haemoglobin and myoglobin in blood and muscle.

Why do they cause cancer?

Suspected carcinogenic chemicals can form during meat processing. These include N-nitroso compounds and polycyclic aromatic hydrocarbons.

Cooking the meat at high temperatures, especially on a barbecue, can also produce these dangerous chemicals.

However, the WHO’s experts admit that the cancer risk is “not yet fully understood”.

What do the WHO classifications really mean?

Processed meat has been placed into Group 1 as the scientific evidence says it definitely does cause cancer.

Although this does not mean all Group 1 agents - which include tobacco, plutonium and alcohol - are equally dangerous.

Red meat is in Group 2A, however, because the WHO says there is insufficient evidence to give a definitive ruling.

Is meat as bad as smoking?

Estimates suggest 34,000 deaths from cancer every year could be down to diets high in processed meat.

That is in contrast to one million deaths from cancer caused by smoking and 600,000 attributed to alcohol each year.

As someone who is currently consuming simple canned chunk chicken in water as a protein supplement, does this apply at all?

Everything I have read about this story pertains to red meat.

However, I would assume that processed is worse than unprocessed in almost everything. For instance, processing a potato into potato chips.

I don’t think that counts as a “processed meat”. It is literally just normal cooked chicken thats been cut up and packed in water. When they say canned meats they mean stuff like Spam or a canned ham.

I just saw someone the other day say eating an egg is like smoking 10 cigarettes LOL. I feel like these people would make more headway if they just asked us politely to cut down on animal products. They’d see better results than lying to people.

But its okay, our poor brains are so clogged with meat that we couldn’t possibly fact check them ourselves.

If one thing is worse than smoking it’s probably sugar …

However, I would assume that processed is worse than unprocessed in almost everything. For instance, processing a potato into potato chips.

That’s a terrible example. Potatoes are gross but potato chips are delicious.

I eat processed meat while smoking a cigar.

The only thing that doesn’t cause cancer is cancer.

I’m pretty sure cancer does cause cancer. In fact, that’s the big problem with cancer…