This weekend I decided I wanted to make a solid out of Soylent 2.0. After reading a misleading post of the Soylent subreddit I decided to create my own recipe. The results are that it taste pretty much exactly like a normal waffle.

I took the lazy way out and just mixed everything together at once in a bowl and then poured it into our waffle maker. The waffle maker can make two waffles at once and the recipe made 8 waffles.

I did use white flour because that’s what I had so keep that in mind if you want to make this healthy. Also My fiance and I both agreed this could have used some vanilla extract. I would recommend adding 1/2 teaspoon of vanilla extract to the recipe or she also suggested cinnamon.

4 Waffles in a pile

A better shot of the waffle maker

I used up the syrup bowl

P.S. For those interested to make it feel more communal we fill a bowl with syrup that we all break off pieces of waffle and dip in.

In order to make this I took two waffle recipes that I found online and altered. The recipes I found made double this amount but since I was only using one bottle of Soylent, which comes out to around 1.7 cups, I halved it. My thought process was that since Soylent has oil in it, it could replace the oil in the recipes and I figured it would be a good replacement for milk so I took that out of the recipe also. The two recipes I used to build mine were the following. 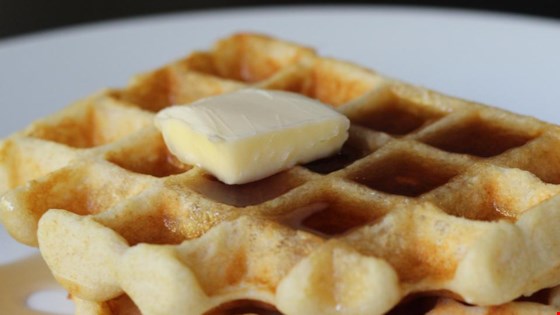 Made-from-scratch waffles are ready in less than 30 minutes with this basic waffle recipe.

These waffles are super crisp on the outside, light as a feather inside and so scrumptious! Avoid removing them from the waffle iron too soon; they should be a golden brown. Enjoy!

I assume it’s the no HFCS that most people gravitate toward. There’s usually that brand, the store brand, and aunt Jemima, maybe another brand or two, but Log Cabin has a wide range of varying syrup versions.

Perhaps this is ironic since I subsist mostly on Soylent, but if I eat syrup I don’t want colored/flavored corn syrup (high fructose or not!), I’d like real maple syrup. Hell, I wouldn’t mind synthetic maple syrup if it tasted the same.

In my defense, my dad was Canadian, so I’ve got half pure American freedom and half maple syrup running through my veins.

but if I eat syrup I don’t want colored/flavored corn syrup (high fructose or not!), I’d like real maple syrup.

I always assume anyone consuming the colored/flavored syrups has never had maple syrup. It’s just inconceivable to me that someone could accept such an inferior product if they knew what they were missing out on - so they must not know what they are missing out on.

[quote=“inod3, post:6, topic:24248”]
I always assume anyone consuming the colored/flavored syrups has never had maple syrup. It’s just inconceivable to me that someone could accept such an inferior product if they knew what they were missing out on - so they must not know what they are missing out on.[/quote]

I hate them. Sorry.

I was brought up on cheap corn syrup, and only that or fake syrup tastes ‘right’ to me.

makes waffle recipe, people only care about choice of syrup…

makes waffle recipe, people only care about choice of syrup…

Let’s kick it back the other direction?

When I think of solid soylents I think nutritionally balanced equivalent to Soylent. Something I could live off healthily. When cooking with Soylent it seems like the Soylent becomes a small part of the solid. In this case 236 calories of 806 calorie (plus whatever from the syrup) waffles. What does this do for the overall nutrition of the item? Are the other 570 calories nutritionally balanced - could I sustain myself off Soylent waffles?

All this maple syrup talk has me wondering how a bottle of Soylent 2.0 would taste with a bit of maple syrup added. Hmm.

If your going to try to use it that way I would definitely suggest using a healthier flour then what I did. I used your standard all purpose white flour. If you used a healthier one you would also lower the calorie count a bunch.

The reason for making it into waffle form isn’t to make it healthier, I acknowledge that it does the opposite. The purpose is to make it more appealing the masses. My fiance doesn’t like Soylent. She doesn’t like the idea of it or the taste of it. But when I put it in waffle form she is completely okay with it. So I find it is a good way to take what could have been a much more unhealthy breakfast and making it into a breakfast that still tastes like what she is use to but is more nutritious.

Attempts to survive on just Soylent 2.0 waffles are not recommended and should be done at your own risk.

Adding maple syrup to a bottle actually sounds really good. I might have to try this. On your other note the reddit community has asked me to redo the ratios so that it uses a full bottle of Soylent 2.0 so I may be looking into how to accomplish that.

I finally had to post here, as the thread title has been nagging me since it popped up, because the website I (until recently) was Site Admin at is called Waffles.

Also, @wezaleff : Real 100% pure Maple Syrup = one of the best things in the universe.