The future of food or a forgettable fad? 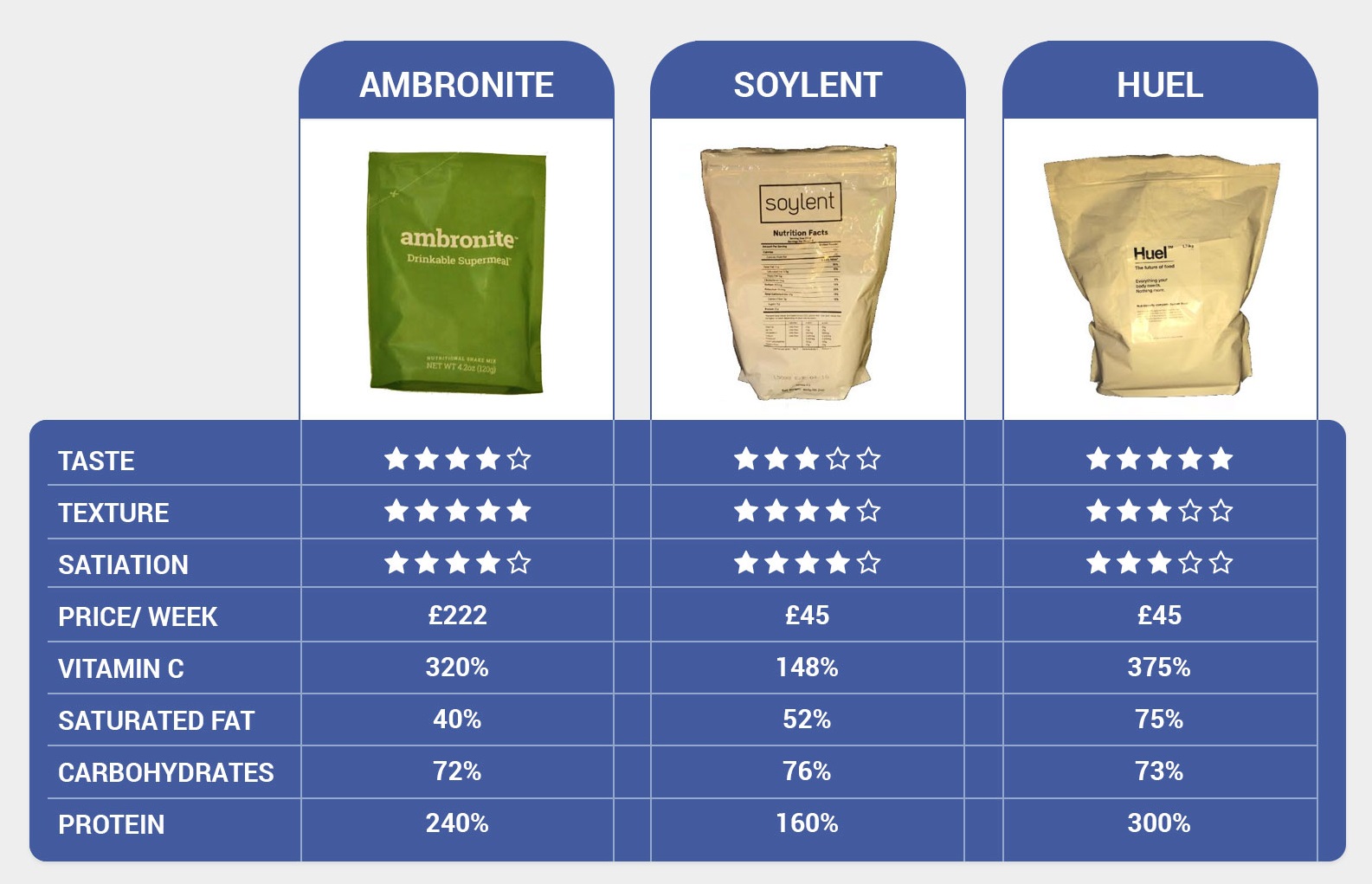 Interesting comparison. The nutritionist in the video at the top of the article brings up the usual concerns.

The chart has saturated fat for Soylent at 52%. I’m not sure what that means. Soylent contains 3gm/serving or 12gm/day. That is about 52% of RDA of 20gm. I just think the chart is misleading

per week?? That is over four times as expensive as the other two.

I’m glad the dietitian brought up the part about chewing. I’ve tried to bring up concerns outside of the nutrient-aspect, and I feel these forums don’t give enough attention to how a purely liquid diet can cause long-term problem such as overly shrinking stomach. Soylent seems to be the best mix out of these three because it doesn’t go as far over 100% as some of the others, it’s significantly cheaper in price (although we need to recognize that like every other topic, price only matters to some and all of these things are specific and unique to an individual), and while it gives up a little in taste according to this article, it provides more in texture and satiation. Taste can be modified.

About the health concerns from a liquid diet which is my biggest worry, at this point I’m figuring other people will run into problems before I will, and if those problems start getting reported on a regular basis then I’ll change things up. Companies can’t hide that kind of thing anymore with the internet existing.

I’m glad the dietitian brought up the part about chewing.

One of the things I have seen mentioned for that is chewing gum to keep jaw muscles from atrophy due to non-use.

Yeah, unfortunately gum gives me headaches personally. I’m not sure why. I still go out enough that I don’t think my jaw muscles will be the problem, and what about talking? Wouldn’t that keep muscles up at least to some extent? Even so, chewing gum doesn’t really solve the other issues the dietitian brought up about, and there are a whole host of issues that could pop up from a liquid diet. Things like Ensure have been around for a long time so this isn’t completely uncharted territory.

The first time I had an idea like Soylent was when I was about 7 years old. I grew up on a farm and we fed our calves milk replacer, which is literally a powder that you mix with water and then feed to them through a bottle with a nipple on it. I asked my stepdad if I could eat some and he said people don’t eat that kind of stuff, which given my personality, made me instantly wonder why not. I asked why we fed it to our calves and he said to help keep them healthy (a lot of calves have troubles sucking or some cows won’t allow their calves to suck) so they don’t get sick. It’s kind of funny about 20 years later and now we basically have milk replacer for humans. You can even get a bag of the 25 lb for around $30 (and there are bigger bags that are even cheaper): http://www.ruralking.com/merrick-s-calf-milk-replacer-regular-25-lb.html I’m sure research done on animals could help guide research on humans in terms of “meal replacement”.

People complain about the name “Soylent”, but to me “Huel” sounds like someone throwing up.

People complain about the name “Soylent”, but to me “Huel” sounds like someone throwing up.

Huell would like to be the future of food.