"The same diet may have different effects on different people"

There’s some new research that highlights how we each have different nutritional needs, and what is beneficial to some may not be beneficial to others. 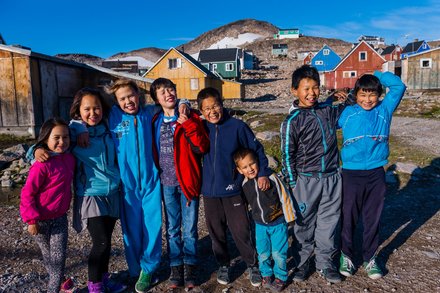 A new study found that ancestors of the Inuit evolved unique genetic adaptations for eating a diet rich in fish and whale meat.

Which makes me want an ambient, customized soylent maker even more:

[quote=“biab, post:9, topic:5212, full:true”]
Since before Soylent, I’ve envisioned a system that could ambiently, or with extremely minimal effort, assess an individual’s current needs (e.g., http://news.bbc.co.uk/2/hi/health/1433904.stm , http://www.halfbakery.com/idea/doctor_20toilet). Soylent gave me hope than not only would we be able to ambiently assess, but we could use that assessment to create up-to-the-minute custom prescriptions. I think something like your Soylent GA in combination with http://discourse.soylent.me/t/soylent-vending-machine/497 and some type of data recording device (e.g., to keep track of things like recently prescribed soylent meals, recent assessments, preferences) would provide the dynamic formulations.

In other words, I could wake up and take a leak. My in-house diagnostic toilet would send my phone my pre-breakfast assessment while I make my way to the kitchen. Once in the kitchen my in-house soylent machine would ask if I want a latte, berry, or other flavored soylent, and based on my option and pre-breakfast assessment it would prepare my up-to-the-minute customized soylent formula and send that formula to my phone. This would repeat over the course of the day, with each subsequent meal taking into account not just recent assessments, but also all the previous meals of the day.

In theory, other assessment sources (e.g. dna, blood pressure cuffs, blood draws) or prescription sources could be factored into the dynamic soylent formula. For example, after a traumatic accident a surgeon could prescribe a lower caloric level along with pain killer. (Albeit the latter would make it more difficult to use public Soylent machines. Even then something like a powdered version of the prescription could be blister-packed and used in soylent machines.)
[/quote] (highlight added)

It seems like we would need to sequence each individual’s genome and know how to infer a person’s nutritional needs from their genome.

We dont currently know enough to do this at the moment. However, I imagine that in the future we would be able to upload results from something like 23andme and get a personalized soylent. Due to the modular design of soylent it is well suited to something like this.

The sad thing is, as much as I am looking forward to this future, I won’t have my own genome sequenced until there are adequate legal measures in place to ensure that any form of related discrimination is prohibited (e.g. “you’re likely to die of heart disease or cancer before you’re 55, so we’re not going to hire you”), and that when such discrimination happens there are massive penalties paid to the discriminated party.

When I was born, sequencing my genome would have cost over a million dollars and taken months. Today I can get my snaps sequenced for under $100 in a week. In 10 years itll cost the same as a cheeseburger and take a half hour.

@sylass94 - I tend to agree with your prediction. Such ease and speed in testing would certainly allow for personal formula modifications based on an individual’s epigenetic changes over their life.

Im glad you mentioned epigenetics. People think they can sequence once but the more often you sequence the more reliable the data. I think this one and done mentality stems from the age old nature vs nurture debate. When people think of things under that framework DNA is equated to a kind of cemented fate that can never change. I dream of a day when we can have DNA monitoring as easily as heart monitors on smart watches

If you all have something to say, come right out and say it. Unless youre so cowardly that you would express your disagreement through elaborately timed likes.

If you all have something to say, come right out and say it. Unless youre so cowardly that you would express your disagreement through elaborately timed likes.

@sylass94 I have to admit, I’m really confused by this comment.

I use likes to show either agreement with the actual statement or an appreciation for someone sharing something. I’m not sure how ‘likes’, particularly ‘elaborately timed likes’, could be interpreted as disagreement or cowardly, especially when the liking individual is publicly associated with the liked comment.

It was a joke, the likes spell out “BS”.

One lesson you can take from the revelation about Inuit people and their fishy diet is that we need personal genomics to give us personalized nutrition. Or more prosaically, that some nutritional recommendations should vary depending on your genetic ancestry.

Oddly, the lesson I take is the opposite. It doesn’t really matter what you eat. Inuit people apparently did fine with a diet of fish and whale meat, without eating fruits and vegetables. I think beyond a certain point, nutrition probably runs into diminishing returns with regard to its health impact. How much healthier would a person drinking a personalized Soylent ten years now be from a person today drinking generic Soylent 2.0? My hunch is that once you get the basic parameters right, diet doesn’t matter.

It’s like the <a href=http://discourse.soylent.me/t/we-know-what-a-healthy-diet-is-now-can-we-stop-arguing-about-it/23494?u=deepriverfish>video you posted, sylass94, with David Katz arguing that it’s clear that the best diet is one mainly composed of plants, and beyond that, the differences between different plant-based diets is so small it’s not clear which is better for you. If the effect is so small that it’s hard to even tell, it’s so small that it’s probably not worth caring about.

Lifestyle — diet, exercise, and alcohol/tobacco/other drug use — is easy to solve from a scientific standpoint (though not a behavioural standpoint, of course), but the effect of solving lifestyle isn’t momentous. The difference in average lifespan between the United States, with one of the worst lifespans of well-off countries, and Japan, the world’s longest-lived country, is only 4 years.

The bigger health concerns are the things that are scientifically hard to solve and is completely out of an individual’s hands. Either they’re bacteria and viruses invading your body, which we almost never have to worry about in well-off countries, or they’re what gets called chronic disease. Chronic disease is overwhelmingly caused by aging. Lifestyle has little effect on aging — as mentioned, in the ballpark of 4 years. So, there is nothing we can do but cure aging or get sick and die. For people who don’t consider curing aging to be a live possibility, there is nothing you can do but get sick and die.

That’s a bleak and disempowering message. It clashes with the idea that our health is something we control. That idea causes people’s obsession with exercise and nutrition. In some cases, the amount of time people add to their lives by exercising is probably less than the amount of time they spend exercising. So if exercising is considered lost time, some people are actually shortening their lives by exercising. Obsessing about diet is less time-consuming, but it might be just as much a waste of time.

I totally failed to put the two together

I definitely agree that we need to ‘solve’ chronic disease.

At one point I wondered if the extension of life from exercise was wasted by the actual exercise time, but I’ve since seen statistics that indicate it is a net win [1]. At a potentially 1:7 benefit, and if I’m doing the math correctly, one would need to exercise just over 243 days to gain 4 years of life, which matches the difference in average lifespan between Americans and Japanese. (365 [days] x 4 [years] = 1460 [target days]; at 1:7 and subtracting the actual time to exercise gives us a formula to the effect of 1460 = (x *7) - x; which works out to just under 243.34 [days] of exercise that extends life an average of 1460 days).

As for your take-away regarding the Inuit diet, the research shows that there is a relationship between diet and evolution. In particular, it wasn’t that what they ate didn’t matter, it is that as a people, those individuals that could handle a nearly exclusively meat diet (i.e. had or developed the FADS gene mutations) successfully reproduced more prodigiously than those who couldn’t handle a nearly exclusively meat diet. One day, we may be able to modify our own genes with the precision to effect a FADS like effect, although there will likely be side effects that make such modifications challenging choices. More importantly, we currently can modify our diet and will likely always be able to modify our diet with much more ease that we might be able to modify our genes.

I mean, we have to take into consideration how everyone’s metabolism and eating habits effect them as well.

This protection already exists, I believe signed in 2009. Don’t have time to get citations for you right now.

I’m sure there are a lot of things that could be done. Right now I can monitor my weight trend and compute the approximate number of calories I’m burning each day and adjust my intake based on any desired weight gain or loss target. Plenty of other factors could be monitored as well. It might not be necessary to sequence someone’s genome to detect vitamin D deficiency, for example. I’m sure all sorts of factors could be optimized.