"When I heard about Soylent, I thought my prayers had been answered. I was wrong." 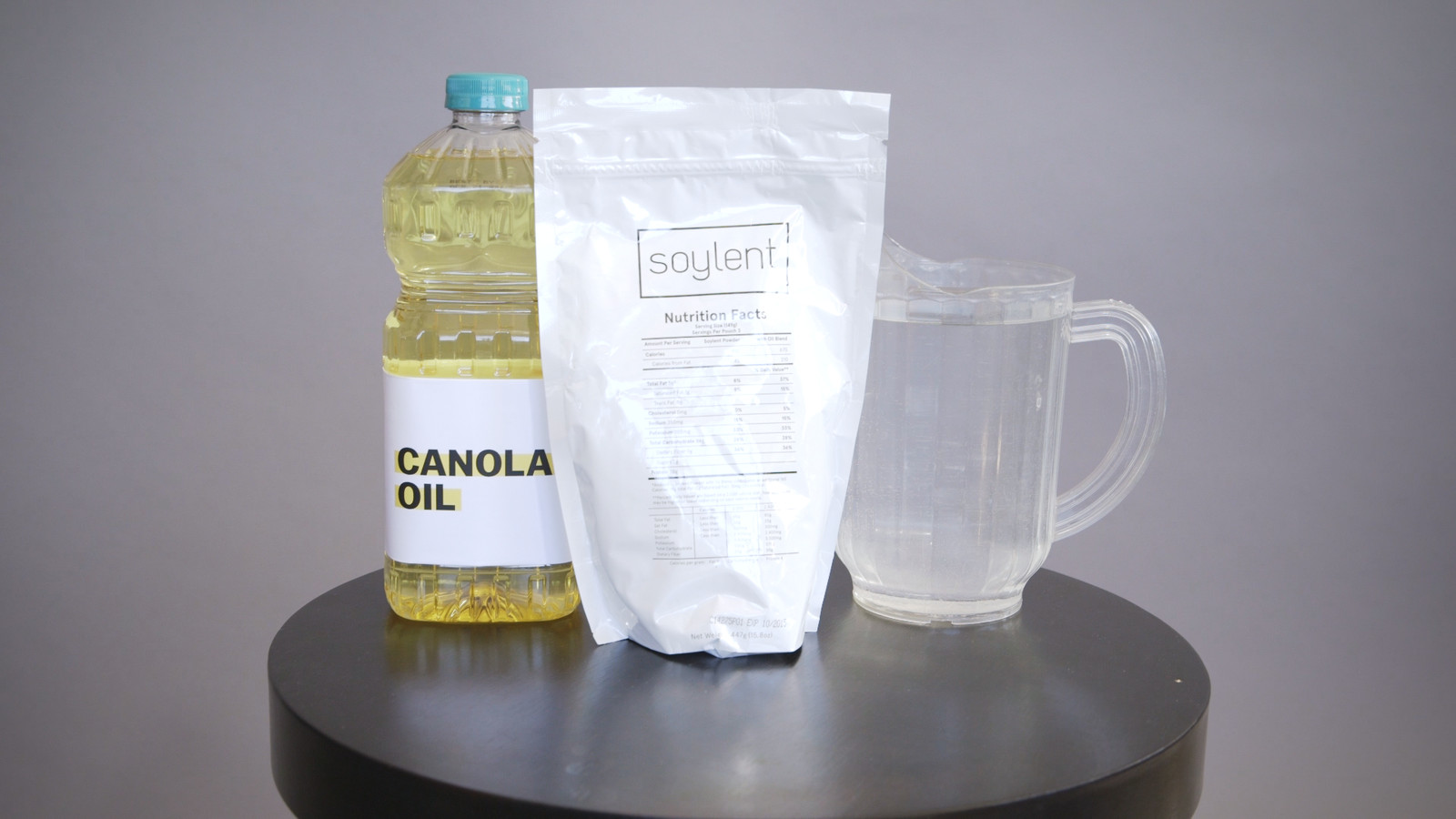 When I heard about Soylent, I thought my prayers had been answered. I was wrong.

I hate food, and Soylent is way too much like food.

The author discusses 3 criticisms she has of Soylent, even though she thought she would love Soylent to begin with.

Obviously, most of us here might disagree with some of the criticisms, but these are the types of concerns that might need to be addressed to some people past the early adopter stage for the product.

… even though she thought she would love Soylent to begin with.

Given the rest of the article seems to amount to being one of those people that can’t strain spaghetti without dumping it all down the garbage disposal, or flat out saying she doesn’t want to give up normal food, I highly doubt the honesty of that statement. 1.0 in May 2015, really?!

I don’t think there is any chance of converting the type of person that finds walking 5 minutes to a restaurant easier than mixing a pitcher of powder and water.

I won’t even address her dilemma of getting through a pitcher in two days; if she can’t figure out to make a half pitcher at a time, I think she is unsalvageable.

The 5 minutes to a restaurant comment makes me think of when I was a student living on campus at a college. In that situation the on campus food options were very convenient. I can see that being hard to compete with. Of course, I was spending more money that way as well but it was through a forced meal plan through the school - I had to spend that money or move off campus.

If money was no object and I lived with similar options 5 minutes walk away I’d be tempted to do the same thing. Money is an issue though - I’m not poor or anything but can’t eat out every meal. And I’d have to walk probably 20 minutes before I start getting to anything - further if I want some variety beyond fast food burgers. An hour+ per meal makes it much less convenient.

I do agree Soylent could be made more convenient. Mixing single meals is awkward. Scoop and bag are not made for each other. RL needs to take a clue from the existing nutrition industry. Either package single meals in a bag, or put the powder in a tub that is easy to scoop out of.

I am assuming that is 1.0 they are taste testing in the video at the top of the article, due to the references to 1.0 in the article. (Obviously it isn’t 1.4 from the color.)

That was probably the worst, most idiotic article I’ve ever read about Soylent.

The general public will be more along the lines of this guy than we are. Us early adopters are on the shallow front end of the bell curve.

I actually more-or-less agree with his first point, too. Hard to argue that delivery or take-out is less “convenient”. Right now I’m reminiscing over the good ol’ days when I lived next door to a drive-thru, back when I was fat…

The general public will be more along the lines of this guy than we are. Us early adopters are on the shallow front end of the bell curve.

I respectfully disagree. His main objections are 1) Soylent is difficult to mix in a blender. It clumps, it separates, pitchers are bad mixing vessels. Maybe I’m a savant, but my Soylent doesn’t clump when I shake it up in the pitcher, and I don’t think it is a burden to reshape for five seconds to handle the separation. And 2) Soylent doesn’t mesh well with his unsure meal scheduling. I think it is the large consensus of Soylent users, that Soylent is convenient because you can just have some when there is no meal planned, but can be skipped if you have other meal plans. Again, if he is afraid of prepared Soylent expiring, he could just make a half-pitcher. Or blender bottles.

I will agree that I am, along with most early adopters, on the shallow front-end of the bell curve. But I am fairly good at being impartial, and I think that the author is off when it comes to the negatives of Soylent. He could list taste, stigma, costs, and they would all be more valid reservations than “too hard to shake up in a pitcher” and “preparing Soylent prevents me from going out to dinner with my friends.”

Yeah, the article mentioned the included bottles, and then (to exaggerate the “inconvenience” more I am sure) went ahead and took the “supply your own oil” route. Another strike against it. I seriously wouldn’t have been surprised if the writer would’ve still whined about mixing by shaking the pitcher even if RL had included an immersion blender!

If it was truly 1.0 and was used recently, he may have thought that the supplied oil was past its best-by date?

I think the author is just in a demographic that Soylent isn’t likely to make a big dent in, as it currently exists. He’s got a variety of take-out places that he likes nearby, and he can afford to pay a premium to buy his meals prepared. If Soylent becomes available in pre-mixed single-serve bottles that’ll last a week or two, that might hook him. He could buy half a dozen a week and use them on weekends and the nights he’s not interested in going out.

I agree with him about the results of mixing in a pitcher. (Though I’ve always used DIY, that may make a difference.) I used an immersion blender for a while, and now I make a single serving at a time in a Blender Bottle.

I agree with him about the results of mixing in a pitcher.

I never had any before 1.4, so I can’t speak about those. With 1.4, as long as I have not added anything, I find a good shake in the pitcher is all that is needed; it dissolves really well. I find it only has issues when I have mixed things like whey protein isolate in with it.

Of course, people look at me like a human paint mixer the first time they see me I shake a can of V8 or other similar drinks, so ymmv.

Of course, people look at me like a human paint mixer the first time they see me I shake a can of V8 or other similar drinks, so ymmv.

Have you seen the commercial for the “Shake Weight”? I’ve been told I look like that when I shake up my lunch at work.

With bottles and cans I use a more rotational motion; I only need to do that kind of motion with the pitcher. It’s not that I couldn’t do it, I just don’t think the pitcher’s handle could manage the g-forces involved.

Eh, most of the stuff you said is right, and I didn’t argue that. I only addressed the first point, about mixing (he didn’t use a blender, either, the dummy!). I don’t find it to mix that well without a blender or giving your arms a major workout; I always get clumps (both suspended and esp. sticking to the sides). And the powder itself is sticky, which makes it a pain. Just yesterday I picked up my latest shipment on the way to work. Mixing it in a bottle there ended up with a lot of powder spillage at first, then it just got stuck in a funnel I made, then it just became clumpy glue in the bottle… it was an ordeal. haha Admittedly, I wasn’t prepared for that yesterday, but it goes to show that it takes a learning curve + preparation + the right tools + time working at it. None of which one needs to pick up a phone and order pizza.

That’s all. It’s really a small thing, IMHO. NOt a big deal at all. But for some (and I’d argue, for a very large minority, at least) it would feel to be a bigger deal, much like the guy in the OP’s article. (personally I think folks like that are a bit too lazy)

tl;dr The article’s author is 95% wrong, but the 5% shouldn’t be written off by the Soylent team.

Regarding Soylent convenience + taste: “Would a stoner/slacker buy it?”

If the answer is Yes, then look out, world, Soylent’s a-comin’ to a store near you!

“But cooking is fun!” you say. Wow. Wrong. Cooking is a tedious process that can result in you stabbing yourself or burning your house down. It’s awful. If you think it’s fun, you should consider trying actually fun things such as drinking at bars and playing “Mario Kart.”

Well, apparently cooking is only fun if you’re smarter than a Sim

To my eyes the whole article reads like click/link bait.